The official text for this page is the Spanish version. You will not be able to see the whole text in your language until its automatic translation is fully validated. In any case, should you have any doubts concerning the precision of the information translated in this site, please check the official Spanish version.

The state of alarm declared for the management of the health crisis situation caused by COVID-19, by means of Royal Decree 463/2020 of 14 March, led to the temporary closure of the offices of the Tax Agency for on-site care.This made it necessary to seek urgent alternatives to processing, up to that point, the tax residence forms of the various countries.

The common feature of most of these forms (for example, Portugal’s 21RFI, France’s 5000-ES and other similar forms) is that, alongside the sections in which the taxpayer declares the data on income received in the country of the tax authorities requesting the form, there is a section to be filled in by the AEAT certifying, where appropriate, the taxpayer’s tax residence, by means of the handwritten signature of the official and the affixing of the AEAT stamp on the paper form.

Thus, for example, in Portugal’s Form 21RFI the certification of tax residence by the AEAT is done by signing and stamping the following section:

This form of certifying the tax residence of a taxpayer has no greater legal validity than that provided by the certificates of tax residence approved by Order EHA/3316/2010, of 17 December, the content of which appears in Annexes IV and V of the Order (BOE No. 311, of 23 December 2010). 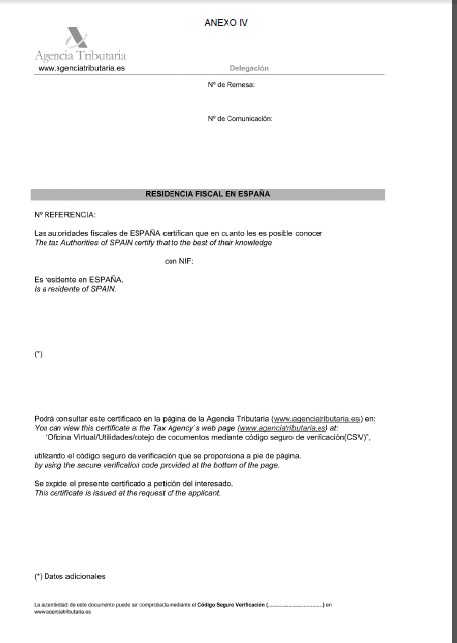 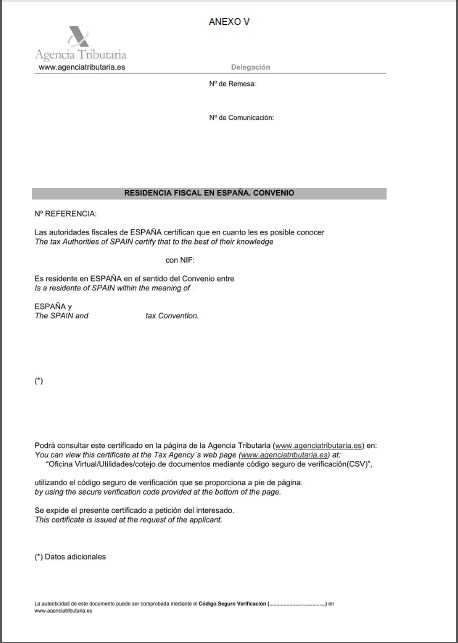 The tax residence certificates approved by this Order, unlike the tax residence forms of the different countries that are processed in person on paper, can be requested and obtained through the Tax Agency's electronic headquarters by accessing the following link:

In order to guarantee the integrity of the document, so that the Tax Administrations of the countries where the certificate is to be presented may check it through the AEAT’s e-Office, said certificates are issued with a Secure Verification Code (CSV) and an annex is attached to them explaining in detail, both in Spanish and English, the guarantee offered by the CSV, as well as the stages of the simple procedure to check the tax certificates presented by taxpayers to the Tax Offices of the different countries.

For this reason, during the state of alarm, as an alternative procedure to processing the tax residence forms in person, the issue of tax residence certificates approved by Order EHA/3316/2010, of 17 December, was offered with the guarantees described.

Additionally, the AEAT informed the various countries of the solution adopted in view of the impossibility for taxpayers to submit the tax residence forms of the different countries for processing at the offices.

Given that the health situation once the state of alarm has ended makes it advisable to maintain prevention measures against COVID-19, one of which is to minimise the handling of paper documents due to the possibility of the virus surviving on this physical support, it is therefore considered appropriate for the AEAT to maintain the alternative system for issuing tax residence certificates approved by Order EHA/3316/2010, of 17 December.

This measure will be communicated again by the AEAT to the various countries.

Consequently, the taxpayer must:

Following the example of the Portuguese Form 21RFI, this section, completed by the taxpayer, would remain as follows: